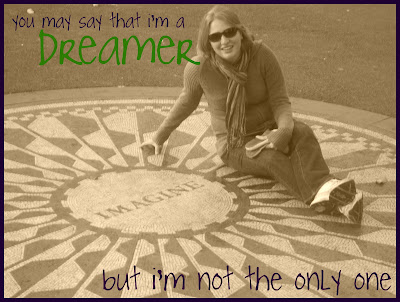 Black= To Do, Grey = Completed, Purple = In Process
Travel

Visit the deep south of the United States with my dad.

Go back to Spain with Anna or Maria…or both!

Visit the Alhambra in Granada, Spain.

Go to New Orleans Jazz Festival with my dad.

Go on a road trip through the United States.

Live in Boston, New York or Chicago for at least one year.

Live somewhere where I can use public transportation for a year. (Completed: Cali, Colombia, July 2009 - July 2010)

Take the SATC tour in NYC.

Take a picture on the Brooklyn Bridge.

Be able to get into Parsva Bakasana (Crow) pose in yoga.

Run a 5K without stopping.

Run in the Twin Cities 10 mile.

Learn how to change a tire.

Go out to eat at a nice restaurant by myself.

Submit an article to the op-ed section of a newspaper.

Floss my teeth everyday for a month. (Completed: February 2011)

Be conversational in a third language.

Go to grad school for a masters in education.

Teach low income/high risk youth in a big city for at least one year.

Attend a conference with NCTM (National Council of Teachers of Mathematics).

Meet Joe Mauer and take a picture with him.

Go snowboarding with Danny at least once – try not to break anything.

Plan & go on a camping trip with lots of friends.

Volunteer in a political campaign that I really believe in.

Donate clothes or household things at least twice a year.

Learn to use Adobe Photoshop well.

Develop my own pictures.

Print and scrapbook the pictures from my study abroad trip to Spain. (Completed: October 2011)

Paint at least one room of my house with a bold color that really stands out.

Sit in the front row at a concert.

Take surf lessons at least once.

Do a runner at a restaurant.

Get a bikini wax.

Go to the World Series.

Play on an ultimate Frisbee team.

Get someone to pay me to write about or take pictures while traveling. (Completed: February 2011)

View as a Google Doc here.

I want to share thoughts about read the story,touched to serdca..https://quivo.co/19892-piloto-italiano-graba-en-vivo-su-muerte-luego-de-que-su-salto-terminara-en-tragedia.html.........Want to know what you think about it.

Very interesting blog. Often I read your record. I want to ask all the guests here on this news site https://quivo.co Can you believe it? It is terrible news published there, just in case, and crime is constantly .. really all true happening in Colombia ?!