When Kelsi and I made a list last spring break of the ten things we wanted to do before leaving Colombia, attending Carnaval de Barranquilla was definitely on the list. In fact, all we wrote was #6 - Carnaval. It's happening. Basically, after missing the celebration our first year due to lack of awareness that it was happening and missing the second year due to lack of awareness in how far in advance we needed to plan, there was no way we were letting this slip by for a third year!

The Carnaval de Barranquilla is Colombia's most important folklore festival and essentially shuts down all other activities in the city of Barranquilla for the four days before Ash Wednesday. The carnival begins on Saturday with La Batalla de Flores (the Battle of the Flowers), a six hour (!) float parade and the biggest of carnival. On Sunday, La Gran Parada (the Great Parade) features lots of dancing and costumes (even more than the day before!). Monday is El Festival de Orquestas (the Orchestra Festival) which is basically one long concert of various Colombian music groups. Finally, on Tuesday the carnival culminates with the symbolic burial of Joselito Carnaval.

Throughout the four days of celebration the theme is: Quien lo vive, es quien lo goza! (Who lives it, is who enjoys it!)

Who doesn't want to attend a giant festival with a slogan like that???

Therefore, this year we got things started early and by the middle of September we had convinced eight friends to join us, bought plane tickets and put down a 50% deposit at Hotel Prado 72. With our trip mostly paid for six months in advance we had nothing to do but wait for the fun to arrive! In the weeks leading up to Carnaval we also purchased tickets for assigned seating at mini-palcos during the main parade on Saturday. Thanks to some inside tips from coworkers we learned that this was the way to go at Carnaval. The parade is the beginning of the party, so you definitely want a good seat!

We arrived in Barranquilla late on Thursday night and easily found our way to the hotel which is located in the central neighborhood of El Prado. That night we pretty much just went to bed in order to prepare for the weekend festivities.

Friday we spent some time relaxing by the hotel pool and searching for costumes to wear to the parade. We hadn't exactly been aware of the costume aspect for parade watchers before arriving in Barranquilla so we had some catching up to do! Friday night we found our way to a cumbia (a style of music native to Colombia's Caribbean coast) concert in a giant field, and yes, it was about as random as it sounds. However, the whole atmosphere just felt electric with excitement as people prepared for the official start of carnival the next day. Groups of foreigners and Colombians alike were spread throughout the field, dancing, drinking beer and aguardiente, and listening to the music. 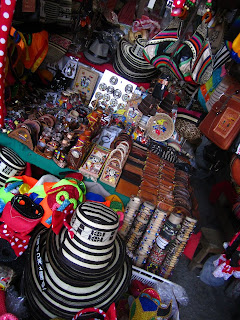 One of many market stalls we encountered on Friday while searching for costumes.

The next day we woke up to the stunning blue sky of Barranquilla and excitement everywhere. We got things started early - getting breakfast, coffee, and costumes on by 10 AM. Errr at least the girls did this. The boys were still sitting around the hotel room not dressed and drinking, so finally we left them behind. We had been warned to get to the parade early and we had about a 15-20 minute walk to get there. 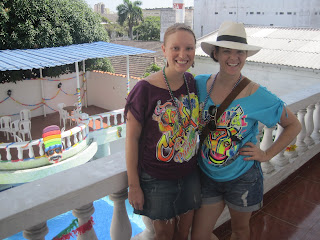 Kelsi and I ready to go in Carnaval t-shirts and beads!

The walk ended up being an adventure in itself. My friends Rita and Sam had chosen traditional Colombian costumes to wear to the parade so several people gawked at the two gringas along the way. Also, for reasons I still do not know, children at Carnaval paint themselves all black and charge at walkers with long sticks asking for money in exchange for letting people pass. The whole thing was a bit odd and un-settling.

Finally at the gates to the enter the parade route I purchased myself a Panama hat to protect from the already brutal Caribbean sun and we found our way inside. Here, the trouble really began as soon as we discovered that the cross streets printed on our tickets were not actually the streets were our seats were located.  Unfortunately, no one else at Carnaval seemed to be able to locate our seats either. After walking many blocks and speaking with numerous un-helpful Colombian policemen, we had had enough. At this point we happened upon quite possibly the tallest, largest, Afro-Colombian military man I have ever seen. Dressed in fatigues and sporting a jet black Camelbak that somehow made him look more intimidating, our new best friend took about 30 seconds to find us a less-impressive man who held a very impressive Carnaval badge. With the help of this man and his magic badge we were soon leaving the un-helpful policemen behind and walking down the middle of the parade route in order to avoid the crowds on the way to our seats.  Based on the crowd response, I think everyone really enjoyed the spectacle of 7 gringas in costumes walking down the middle of parade route. I know I did. 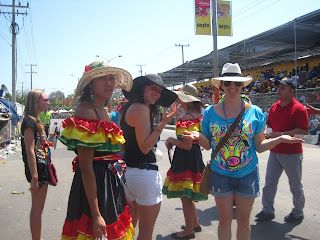 Just a couple gringas trying to find their seats at Carnaval. Note the not super imposing man with his special badge in the red shirt...I wish I had a photo of the Colombian military man.

Finally in our seats at mini-palco number 47, the boys arrived a mere ten minutes later, also having been escorted (but via the sidewalk!) in order to find our seats. Then the craziness began. Led by one of the first floats which featured dancing street cleaners with neon green brooms and including a variety of brightly colored costumes and floats, the parade was awesome!! We danced and sang along with various floats and cheered on any parade member who posed for pictures or danced near our group. 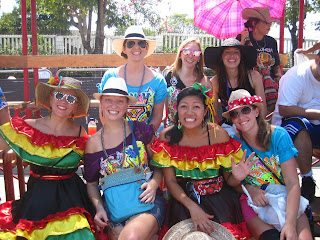 Finally in our seats for the parade and only a few minutes before the start! 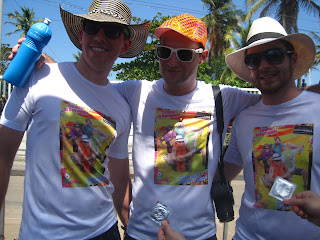 The boys showed up wearing t-shirts they had made which feature a picture of them in ridiculous costumes, naturally. 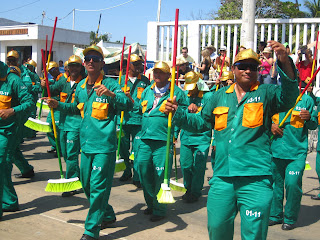 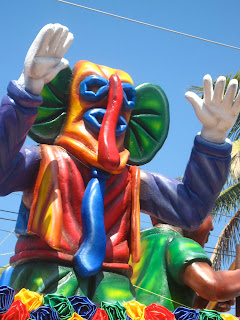 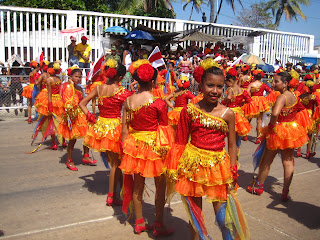 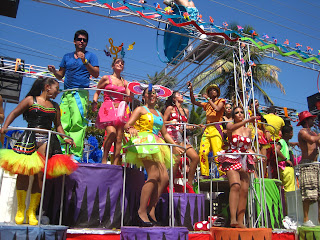 One of so many brightly colored floats! 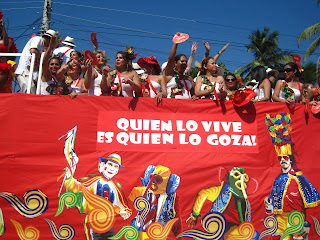 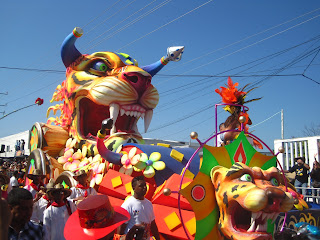 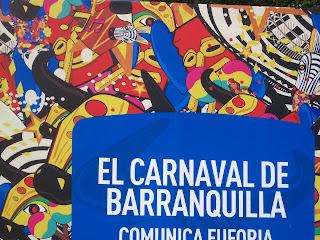 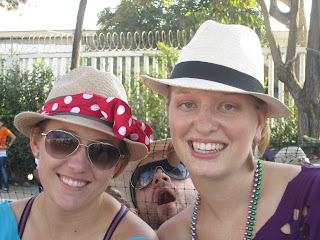 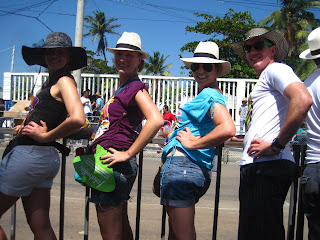 Getting our Carnaval on!

Six hours later our group of ten was down to five since some people hopped the fence to join the end of the parade, so Jessica, Cassie and I decided to locate ourselves some food and lots of water. We happened upon a deliciously random combo restaurant serving Italian and sushi. A fabulous end to a great day of celebration.

Sunday we enjoyed more (recovery) time at the pool, Kelsi and I led ourselves on a self-guided tour of Barranquilla AKA walked to the nearest Juan Valdez for coffee and we headed back to Cali. A little sunburnt, exhausted, most likely dehydrated, and with new costumes for future shenanigans we certainly lived it and we most definitely enjoyed it!

Dazzle on a Dime said...

Great blog! Here’s a great website you’ll love. Over 1000 of the best websites for teachers and students. Check out the tab for methods and strategies to find great technology projects, games and ways to challenge your students. Teachers love this site! Please share it with all your international co-workers.
www.dazzleonadime.com