After our last Semana Santa (Holy Week AKA Spring Break) in the Amazonian jungle I pretty much fell in love with the nature and landscapes of Colombia. Despite my well known aversion for anything that has to do with animals or creatures of the forest, I love the experience of being in nature and there is no better way to do that than jump right in! So jump in we did and Kelsi and I opted for three nights and four days at Rio Claro Nature Reserve to begin this year's Semana Santa. 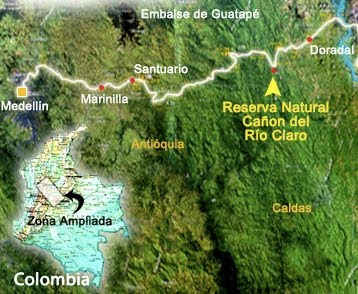 Located about three and a half hours by bus from Medellin, the Rio Claro Nature Reserve is built in order to protect this gorgeous river and its surroundings. The reserve is the only place to stay if you want to visit the river and they do an excellent job of providing great accommodations, fun activities and still remaining conscious of the environment around the reserve.

We stayed in a treehouse style cabana about a ten-minute walk from the main lodge. To summarize...there were two walls and a whole lot of jungle. The first night it definitely took me a little while to fall asleep, but surprisingly the forest/jungle noises were pretty tame and provided a nice backdrop of white noise for sleeping. The rain and thunderstorms every night definitely got my attention, but all was quiet and dry inside our cabana. Also, the weirdest bug we saw was about two inches long and a pretty harmless looking green tree bug thing, so overall... Kristin - 1 and Weird animals of the jungle - 0. WIN. 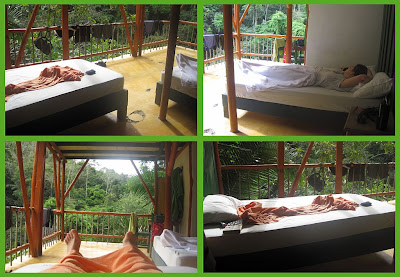 Scenes in our cabana

When we were not gazing out at the river below we entertained ourselves with the various activities at the reserve. Accompanied by some easy-on-the-eyes-guias (guides), we went rafting, tubing, zip-lining and caving! The only bummer is that all of these activities involved water in some way, thus there are no good pictures of them! Basically, the rafting and the tubing involved floating downriver, stopping at some points to check out a rope swing, the depth of the river or because we may or may not have fallen out of our tubes on a particularly intense set of rapids.

Zip-lining had us hooked up to a series of three lines which criss-crossed over the river. My favorite was the second one, which was 300 meters long and took you directly over the middle of the river!! I think zip-lining is one of those things that no matter how many times I do it, will always make me nervous, but it is such a rush to fly through the air only attached to a thin metal cable. 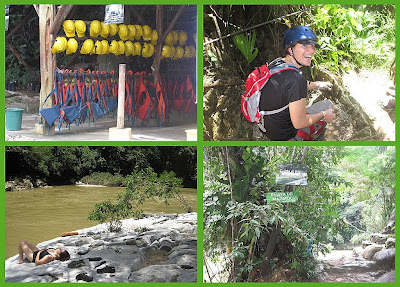 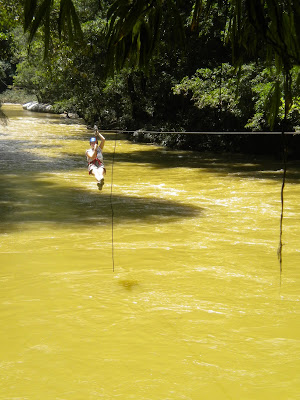 Last but not least, we went caving. This is an activity that we have for one reason or another, never gotten a chance to do on our more adventure-type vacations, but I am so glad we did it at Rio Claro! The three hour hike led us up river, where we crossed the river by holding onto a rope to avoid floating away in the current. Therefore, about 30 minutes into the hike everyone was soaking wet up to their necks. Awesome start. From there we carried on in the woods for a bit before coming to the entrance to La Caverna de Los Guacharos. Guacharo in English is Oilbird and is specific to the northern region of South America. These birds are nocturnal, thus their presence in the cave, and they navigate using sound, just like bats. However, unlike bats the oilbirds make a terrifyingly loud and high-pitched clicking noise which sounds pretty intense when you are in a cold, dark cave with what I estimated to be about a million of them. 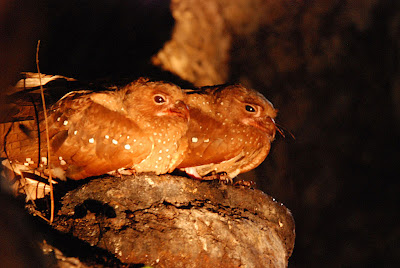 Oilbirds...according to what my Google research tells me they look like. I wouldn't know because I didn't even attempt to get near the things in the cave.

So into the save we went, surrounded in darkness by the time we were about 100 meters inside the cave. Kelsi and I had been laughing earlier in the day about how we never would have imagined ourselves as girls with gear for trekking through a cave, but there we were in waterproof hiking shoes, quick dry clothes, lifejackets (not ours), helmets (not ours) and headlamps. Thank goodness too, because without my headlamp to guide me though the cave I think I would have freaked out at some point. Basically the hike was a lot like the part of Goonies were they are in the cave and there is a river running throughout it. At some points the water was only a few inches deep and at other points it was over our heads. The scariest parts were when our guide would tell us to jump or slide down into the next part of the cave and we just had to trust him that we wouldn't die doing so. At some points Kelsi would have to jump first, I would pass her the not-so-waterproof headlamps and then I would jump down into somewhat darkness. Insanity. After about an hour in the cave we saw signs of daylight and emerged from the cave by climbing down the rocky side of the river and then swimming across once again. Definitely one of the coolest experiences I have had in Colombia, but I think I echo Kelsi's sentiment of "Never again" upon exiting the cave. :)

After our three nights and four days of action-packed river goodness we were ready for some civilization and headed back to Medellin for Semana Santa: Part Two...

Just wondering how much this place cost to stay a night? And how much for the activities. I'll be back in Medellin in Aug, just as Dave from GoBackpacking.com is leaving. I might have to make a stop down there and check that place out, as you make it sound so good. :)

@FOGG Odyssey - Costs $95,000 COP per person per night with everything included except activities. Tubing costs $5,000 to rent for as long as you want to go, rafting & zipline were $20,000 and caving $12,000. pretty good deal considering it was Semana Santa too! I would say definitely worth the trip!!

Wow, that looks like fun! I'd love to go zip lining sometime :) PS. I looked at the prices you quoted and my head almost exploded until I realized the exchange rate is probably crazy so I hopped over to XE and whew. Much better! :)