Urban beats, huh? Yeahhhh...not exactly a part of my cute singer/songwriter boys with guitars genre that makes up 90% of my iTunes. However, a pretty rockin' concert experience if I do say so :)

Last night a group of us headed over to the Centro de Eventos del Valle del Pacifico for the Calle 13 with ChocQuibTown concert. After a long day at school (Sports Day...full of all day madness and babysitting), I needed coffee and an hour of serious down time to psych up for the concert, but it was totally worth it! We got there around 7 PM and the doors were scheduled to open at 6 PM, so with our VIP section tickets (only about $45 USD), we figured we would have no trouble getting in.

As with most things in Colombia that relate to organization, crowd control, logistics and large groups of people in general, we were dead wrong and the scene outside the concert venue was a mess. After some discussion we decided our plan for getting in efficiently was to push through the crowd of waiting people, play the "were just innocent gringos who don't know what's going on" card and be on our way. This sounds absolutely ridiculous, but seriously, after 1.5 years of living in a country of disorganization, where no one respects the line, why were we about to go wait in the back?

The plan led to some awkward moments, like when Kelsi and I were stuck for about 10 minutes in the men's security line and very clearly in the wrong place. But we made it happen, following Kelsi's lead by climbing a barrier to the girl's line in front of a very amused crowd of Colombians. Winners. After three very through security searches and the confiscation of Kelsi's apparently lethal bobby-pins, we were in!

The waiting game began with Miller Genuine Draft beers for Angie and I...served in plastic beer glasses, some Aguardiente (AKA Colombian licorice flavored liquor), and an opening band during which the lead singer busted out a flute. When ChocQuibTown took the stage we were more than ready! Recent winners of the Latin Grammy for this song, this group originates from the Choco region of Colombia, which has a high Afro-Colombian population. Their music is a unique blend of hip hop, reggae, funk and more. They definitely got the crowd into their show and looked like they were having a blast up on stage, an element which always makes a concert more fun for the audience! 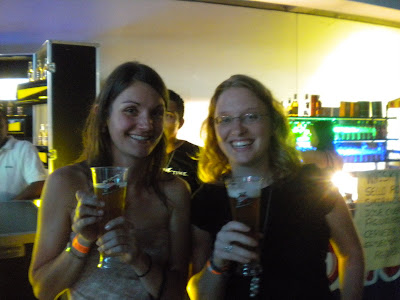 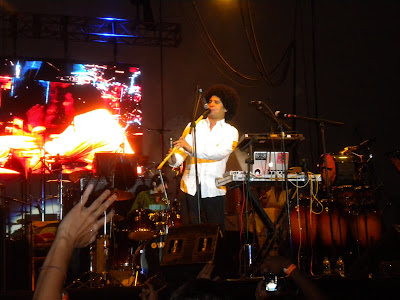 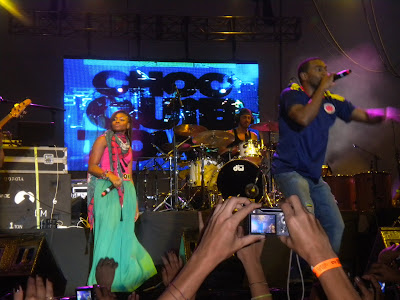 A video of the song (as performed at the concert) that has become the group anthem - Somos Pacifico. Basically the lyrics are about how we are people from the coast and we are united together. People in Colombia take a lot of pride in the region of the country they are from, the same way people in the US take pride in the state they are from.

ChocQuibTown left the stage around midnight and we still had to wait for Calle 13 to set up. However, the wait was well worth it and when they took the stage around 12:30 AM the place went absolutely crazy. Lead singer and songwriter Rene Perez Joglar rushed on stage, took his shirt off halfway through the opening song (and kept it off for the duration of the show), and began with the band's popular "Baile de Los Pobres" The song is basically a social commentary on the differences between the lower and upper social classes everywhere, but specifically in their home country of Puerto Rico. Needless to say this song ignited the crowd and I literally could feel the ground shaking below me from all the dancing and jumping. The lead singer doesn't hold anything back when he sings and this was evident throughout the entire concert.

Backed by his stepbrother and sister, the singer fuels the energy of the group and the entire band and audience fed off this energy all night. For two other songs during the night he brought girls from the crowd up on stage, which is something I love when musicians do, and you could tell by the reaction of the girls and those still in the crowd that this was a pretty big deal. This group has also earned global recognition since their beginning in 2005, performing at the Latin Grammys in 2007, the New Orleans Jazz & Heritage Festival in 2008, a concert to commemorate Ecuadorian Independence in 2009 and Cuba in 2010. While sometimes criticized for their harsh commentaries and strong (sometimes unpopular) social stance on many issues, they are a band with something to sing about, that is for sure. 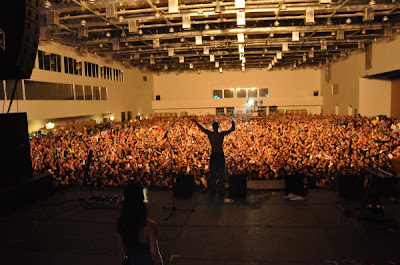 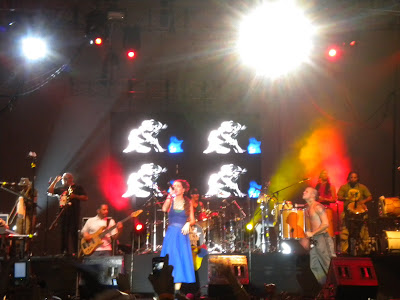 1. Love the explanation on how we got it.

2. "But we made it happen, following Kelsi's lead by climbing a barrier to the girl's line in front of a very amused crowd of Colombians". About that, someone told me to do it, so I did. I vaguely recall it being YOUR idea.

3. Where did the "Calle 13" takes the stage picture come form? I love it. Stealing it.

This is a friendly follow-up to our first message to you (May 2010), to warmly invite you again to list your blog on our Expat Women Blog Directory (http://www.expatwomen.com/expatblog/). Blogs like yours are excellent sources of information for relocating expats, so we would love to include it with our other 1,700+ self-listed blogs.

We are also excited to let you know that we just re-launched our main website (http://www.expatwomen.com/), so please drop by and have a look if you are interested.

Many, many thanks and wishing you success abroad!