"Learn how to say I do not have a scissors in Spanish; I have a feeling that could have helped me out a lot"

International travel is always a bit A LOT of an adventure. More so when you don't exactly speak the language of the country you are going to or coming from. When I sent Katie on her way to the airport with my (very) trusty friend/guy who takes us to the airport, Jose Luis, I knew she was in good hands. We discussed the various craziness of customs leaving Colombia, I prepared her with a hand-drawn map of the Bogota airport, we talked about the possibility of paying an exit tax and I told her where to find free WI-FI if necessary.

As anyone who has ever traveled knows, things went about 10% according to plan.

Katie's response to my email inquiring about her experience in Bogota (so I can help prepare my future visitors aka the boy who gets here in LESS THAN 36 HOURS!) had me in tears from laughing so hard, so I just had to share.

Here is what she responded to my simple: "How was your return trip?" email.

"So at the Cali airport Jose Luis was awesome. He carried by bag and found the desk for my check in. At the desk they looked at my passport and would not give me by boarding passes. Jose Luis then took me over to that little counter where they give you a stamp thingy saying I didn't have to pay that fee [exit tax] you were talking about. We took my stamped passport and that piece of paper back to the check in counter and they gave me the boarding pass for all three of my flights and stapled that stamped thingy to them so I wouldn't not have problems in Bogota. Jose Luis then walked me all the way the security line where he waited with me until it was time to hand me my bag and send me on my way.
Everything was smooth sailing until I got to Bogota. At Bogota you go through a securty check point thingy before entering the terminal for international flights. They stamped my passport again and they put your bag through an x-ray scanner thing. They stopped me and said they were going to search my bag. Remember when my bag was packed so full I could barely zip it? Well on the converyor belt thing they started digging through every pocket taking all my clothes out and looking inside each and everything I bought while I was there. They kept asking if I had scissors and I kept trying to tell them no but apparently they just thought I didn't understand what they were saying.
After the contents of everything I brought was laying on this conveyor belt they realized I had no scissors, I could have told them that, and they started to try and shove everything in my bag fast because the line behind me was insanely backed up at this point. They had three people just shoving things in and trying to zip it. I think the zipper on my bag was 30 seconds away from breaking. I was not about to let the only bag carrying my life be dismantled by these people so I grabbed the bag out of their hands and threw it on the floor. I took the bin full of things they were not even worried about getting back in my bag and threw that on the floor too. (Reference attached picture) 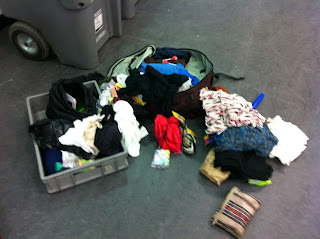 I then proceeded to ignore everything they were saying while I say on the floor and refolded all of my clothes to get everything to fit in my bag again.


After that I used the rest of my money to buy a cup of coffee and a snack to calm myself down. I went onto the international terminal where they check your passport and boarding pass again. I was able to find my gate very easy. Here they let you sit in the gate area but make you clear out 30 min before boarding to set up another security check point. They had individual people searching bags at this check point you have to go through to get back into the gate area. This time the lady went easy on me and opened one pocket and didn't really even look inside. Then I thought I was scott-free and headed for home.
Well of course I would have a little snag in Houston as well. Remember when I took an apple for a snack? Well at 5 AM when my plane landed in Houston I thought I would munch on this apple while getting my passport checked, ditch it in the baggage claim, and head through customs one last time. Well this was a horrible idea. Apparently in the baggage claim in customs there are no garbages because they think people will ditch things they should not have brought into the states. So I was still eating my apple when I went through the customs line and I got red flagged and taken into the separate room. They did this because I was trying to smuggle in the apple I was eating from Colombia I guess. Apparently you can not bring fruit in. Who would have known?

So once again four people searched everything I owned for about 30 min but told me I could finish my apple while they did. I left my apple core with them and was finally on my way. I am so glad I had long layovers because if I didn't I could have missed my flights in both Bogota and Houston with how long searching my stuff took.Advice: Do not pack and buy so much stuff you can barely close your bag; that will cause major issues. Learn how to say I do not have a scissors in Spanish; I have a feeling that could have helped me out a lot, and do not try to eat any sort of fruit when entering the United States again. They really thought I was trying to smuggle something crazy in."

moral of the story: katie is great.