Amidst rampant reports of landslides, washed out roads, and inoperable hot springs pools, Katie, Stetson and I made the executive decision to stay in Salento for one more night and forgo our previously planned trip to los termales (hot springs) in the nearby town of Santa Rosa. I called on Saturday morning to cancel the reservation after not being able to reach anyone at the lodge for the previous 12 hours and we resolved to make the best of one more day exploring Salento!

Around 1 PM on Saturday we found ourselves sitting in one of so many cute cafes in Salento, enjoying a lazy day exploring town, when my friend Samantha called to say that someone from the termales had personally called her to ask when she was arriving. Sam also had a friend in town and we were all supposed to meet up at the termales that night. The woman on the phone assured her that all was fine and she could indeed come to the termales. After I called the termales again and received the same information, we figured why not and set off for Santa Rosa ourselves.

Two 45 minute bus rides from Salento later and I knew we made the right decision. After catching a cab in Santa Rosa we were rolling along the lush, green hills of the countryside, climbing further into the mountains near the hot springs. The scenery on the way there did show us a bit of washed out road, but nothing in comparison to the somewhat falsified news reports we had been hearing in Salento. And the gorgeous river and looming San Miguel waterfall more than made up for the road. 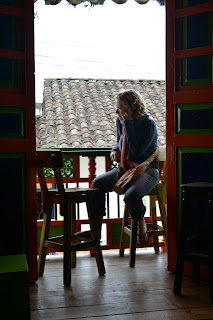 On the phone in a Salento cafe discussing the possibility of going to Santa Rosa.

We were greeted by an adorable old style lodge, friendly staff and the place practically to ourselves because so many people were scared off by the news reports. Stetson, Katie and I settled into our barely large enough room with a definitely not-large-enough bathroom and waited for Sam to arrive with her friend Lisa. They arrived shortly after us and we wasted no time jumping into the warm hot springs. After that bone-chilling hike in the rain the day before, the hot water felt absolutely perfect! After that we enjoyed dinner in the main dining room and an epic game of Uno in which I had half the deck and still came back to win. 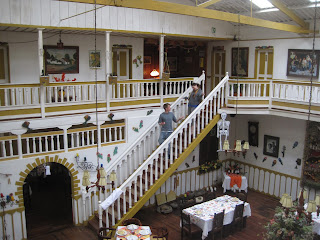 Stetson and Katie make their way down the stairs from our room into the main dining room. 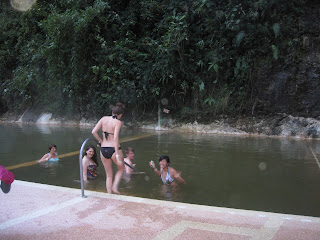 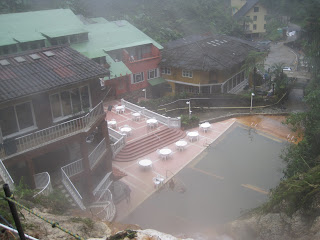 An aerial view of the hot springs and lodge. 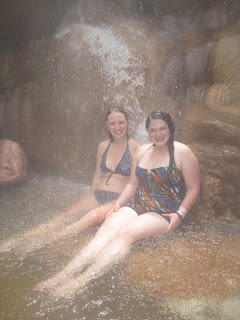 Katie and I soaking up the warm water.

The next morning we enjoyed a typical breakfast of eggs with arepas and bread before heading for massages! Katie and I both got a half hour massage, which was fun and felt so good on our sore hiking muscles. We also had some time to walk up a short path to the base of the San Miguel waterfall for a photo shoot. 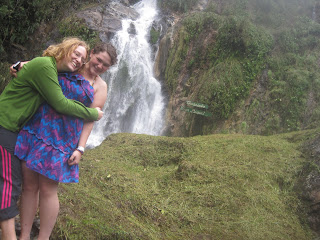 At the base of the San Miguel waterfall. 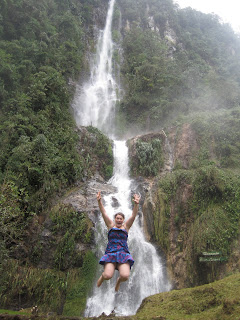 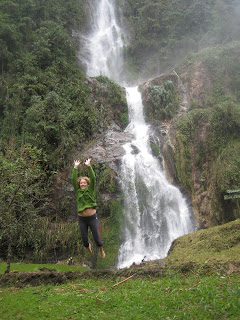 We enjoyed some more time in the termales, took showers (outdoors! overlooking the waterfall!), ate lunch and began the long journey back to Cali. I am so glad that Katie got to see this beautiful part of Colombia and that we were able to share it with good friends! I will most certainly be back in the not-so-distant-future....