Two Days in Salento with Katie

When my friend Anna visited last spring we spent a weekend in the small mountain town of Salento, and I loved it so much I just had to go back!! Initially, Katie and I wanted to go to the coast during her visit to Colombia, but prices just got too high, so we planned a trip to Salento and I am so so so glad. Salento is in the coffee region of Colombia, and while getting there requires about 5 hours of time on buses, the end is so worth it and Katie agreed :)

We left on Thursday morning, armed with backpacks, charged ipods, books, and lots of snacks. I hate being hungry while traveling and then having to eat crappy food, and Katie just hates being without snacks, so we made sure to pack a bag that just included our snacks.  After pretty uneventful bus rides, we arrived in Salento. We dumped our stuff at La Serrana hostel, where Anna and I also stayed, and set off to explore Calle Real, the six or so blocks of excellent shopping opportunities in Salento.

Not wasting any time, we made some great first day purchases, including some mugs that Katie found for her brother and sister-in-law, multiple pairs of earrings, a scarf & jewelry box for me, and even a bell for Katie's mom!! She buys her mom a bell in every place she visits and we were lucky enough to find an adorably decorated one with the name Salento on it! Around dinnertime we met up with some co-workers who were also spending time in Salento. We climbed to the top of a look-out point over the city, enjoyed a sunset photo shoot and had a round of happy hour drinks before heading back to the hostel. 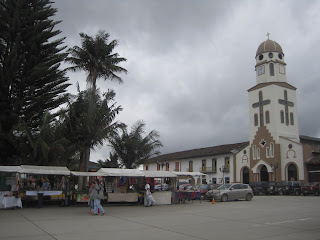 The main plaza of Salento. 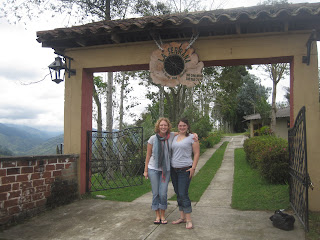 Katie and I at the entrance to La Serrana hostel. 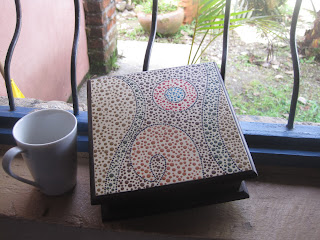 The main reason I chose La Serrana hostel again was because of their awesome family style meals with vegetarian options every night! Thursday was burger night and I enjoyed a veggie burger while Katie had the real thing and we both loved the homemade french fries.  After that it was early to bed as we were setting our to hike in the Valle de Cocora the next morning. 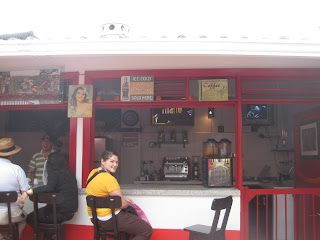 We wasted no time getting right into things with iced  coffees a this cafe in Salento. The man there was nice enough to make Katie and I our very own batch of iced coffees with lactose free milk for Katie! 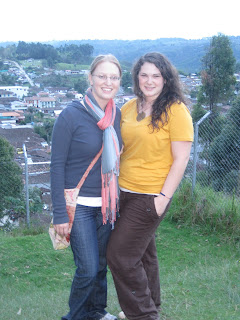 Enjoying night one in Salento as we overlook the town at dusk.

The next morning we met my friends back in the main plaza of Salento and set out for the hike around 9:30 am, once again armed with lots of water and many snacks. The hike takes about five hours to complete, but the scenery is so gorgeous and diverse the whole time that you really don't notice all five hours. We started out in the open valley where the wax palms loom tall overhead and the green mountains surround your view. After about an hour and a half we entered the forest part of the hike, which is filled with muddy paths and many bridge crossings. Katie had an interesting time observing some of the Colombian "bridge" building tactics since she is an engineer back home in Wisconsin.

After another hour and a half or so we reached the Acaime Lodge, where for about $1.50 USD you get a hot drink and a place to sit and enjoy your snacks! We rested our weary legs, chatted with some fellow hikers and psyched ourselves up for the next 30 minutes of the hike. The next 30 minutes were pretty much entirely uphill at a steep slope, with very little relief for the calves. One switchback after another as you climb higher and higher until you arrive at a mountaintop farm, high above the forest and even the clouds!

From here we began our descent downhill and back through the valley. The descent only takes about an hour, but I felt uneasy when my friend Stetson called to say he had arrived in Salento and the rain had been falling steadily there for over an hour. Assuming we needed to hurry up so as not to be caught in a downpour, Katie and I started moving even faster, deviating from the path a bit so as to traverse the valley faster. Deviations or not, we still did not make it, and the raindrops starting pouring down on us. The last twenty minutes of our hike were completed in the pouring rain with no covering and lots of yelling back and forth between ourselves bemoaning the situation. We finally arrived back at the starting point, drenched from head to toe and in desperate need of a hot shower.

Little did we know, but our hostel was out of hot water. We managed to wash off the mud from our legs and arms, but neither one of us wanted to brave a cold shower, so we spent the night bundled up in as many of our warm clothes as possible and playing card games with Stetson. 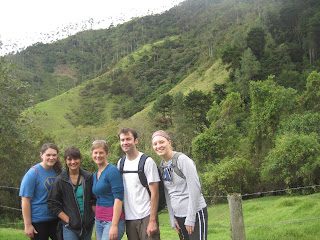 Hiking in the Valle de Cocora with Courtney, Megan and Scott. 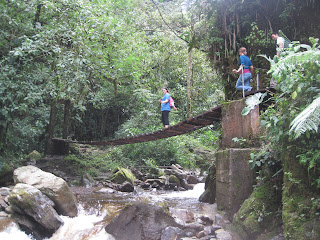 One of many bridge crossings! Hi Katie! 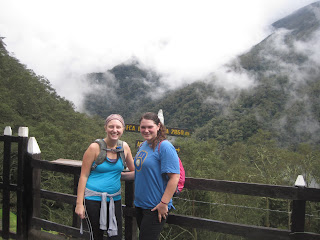 At the top! Rough 30 minutes behind us and here we are above the clouds! 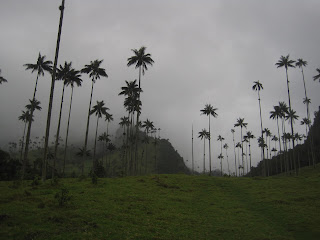 Even while running through the valley in a (failed) effort to miss the rain I snapped a few photos of the wax palms. 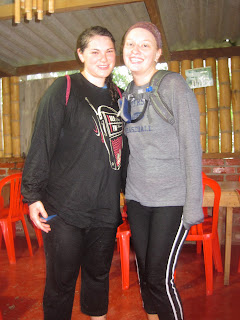 
The next morning we set off for Salento in search of more shopping and to figure out a plan for the rest of our trip. The current plan was to head for the hot springs of Santa Rosa de Cabal, but we had been receiving reports of landslides in the region and along the highway, making it impossible to travel there. We had pretty much resigned ourselves to just spending an extra night in Salento when my friend Samantha called to say she was on her way there and the people at the hot springs claimed everything was fun. Not knowing what to believe, but really wanting to see the hot springs (and make good on my pre-deposit), we packed our bags and headed to Santa Rosa! 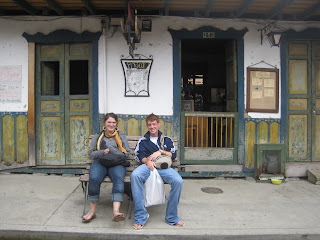 Email ThisBlogThis!Share to TwitterShare to FacebookShare to Pinterest
Labels: Salento