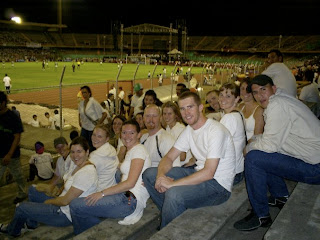 [Lots of teachers from school at the game!]
Last night I attended a soccer game between the two soccer teams in Cali, Deportivo Cali and America. 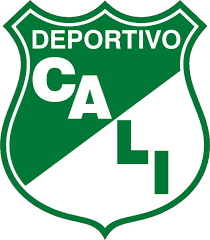 Soccer is super important in Latin America, and pretty much everywhere else in the world besides the States, so people get pretty into it. Normally, when America and Cali play each other there are basically fights, riots, stampedes, etc. However, they played last night as part of a fundraiser for Haiti, so it was supposed to be a "friendship game". (This didn't stop the players from engaging in multiple fights, but such is life...) 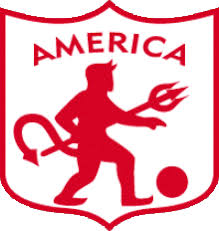 The reason games are so intense is because Colombians in general are such die hard fans. People from Cali have a decided team, either America or Cali, basically as soon as they are born, and they never deviate from these allegiances. Before last night I did not support a specific team. However, I think I will be following the logic of my friend Kelsi in deciding. She went to a game back in October and told me, "we sat on the America side, and America won, so now I like America." Well, last night we sat on the America side, and America won. So, America - I am officially on your side. Traditionally, the America team is the local team without the big sponsorships or money, while Deportivo Cali is known as the "rich team". Seeing as how I am a Minnesota sports fan, "underdog" is basically my middle name, thus solidifying my choice for America.
At this particular game, everyone wore white to show support, hope and solidarity with Haiti. I loved seeing the whole stadium in white, when it is normally covered in red (America) and green (Cali). Also, while people definitely still cheered for their respective teams, the overall atmosphere seemed friendly and fans maintained great moods throughout the game. Only once did the refs have to stop the game and ask the Cali fans to stop throwing things on the field. (Another reason I'm an America fan - clearly this is fate) [note all the white in the background!!]
I definitely want to go to an official Clasico game sometime in the future, but for my first soccer experience this was a pretty cool event. Also, I must say I was struck last night thinking about how truly global in nature the response to this earthquake has been. Very few times since moving to Colombia have I felt that the US and Colombia have the exact same priorities. However, in situations like this I am reminded of how connected our world is and what a wonderful community we can be when we put our minds to it. People all over the world care about others - really care. A pretty refreshing thought, don't you think? :) It definitely left me smiling...

FAN-tastic, what a great thing to do, all in the name of support for Haiti. I read a story today that said a 17 yr old girl who was studying at a university in Haiti when the earthquake hit was just pulled from the rubble yesterday, having somehow survived 15 days buried beneath the rubble. I am not sure exactly how she is doing now, I want to follow the news and hope that she recovers and is alright. Soccer in many countries, like Colombia is not so much a sport as a passionate religion. I have heard that baseball has a similar stature in a lot of the latin american countries. It looks like the stands were filled and it's a nice stadium. What fun!