A Beautiful Sunday for Politics

Sunday afternoon my neighborhood was alive with festivity as a parade and political rally for one of the leading Colombian presidential candidates, Antanas Mockus, happened at the nearby Parque de las Banderas (Park of Flags). For your viewing pleasure, I discussed the details of the upcoming election here.
After listening to hours of crazy music from the windows of our apartment, we headed over to check out the action. Supporters streamed from every street corner wearing the traditional green Mockus shirts and carrying symbols of sunflowers (I still don't know why that is his symbol!). In the middle of the park a stage was set up with live music and people were selling all sorts of Mockus themed merchandise - from t-shirts and pencils to Mockus masks and paper fans. 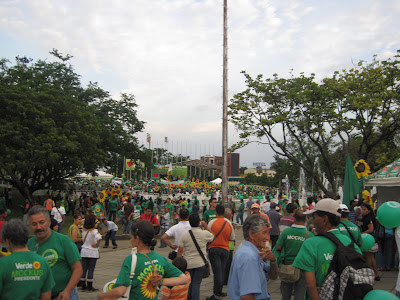 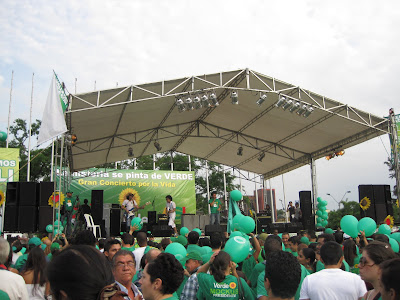 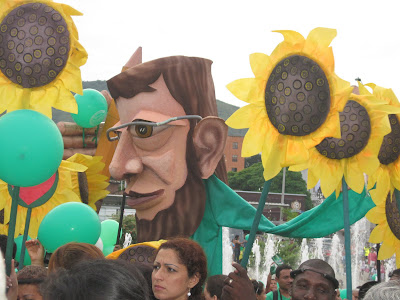 Parade with giant cut-out of Mockus' face.
Last year, during the presidential elections in the United States, I had the opportunity to attend a few different political rallies led by Michelle Obama, Barack Obama and Bill Clinton (out in support of Hillary before the democratic candidate was announced). These events are always high intensity and high energy, making them a unique way to really capture the democratic spirit of an election.

Being at the rally, if only for a short hour or so, made me think about how far Colombia has come in recent years. In wasn't so long ago, only 20 years in fact, when a leading presidential candidate was assassinated during his own rally meeting. Now people are peacefully attending rallies without the same fear of repurcussions for being involved. Pretty cool - huh?

Another cool aspect of the upcoming election is how well informed my students are about everything! They know the candidates, their histories, their platforms, their slogans, they know the process, the rules and the regulations. I do not ever remember knowing very much about either presidential candidate until I started paying attention to the 2004 elections at age 17. Now these students defend their chosen candidate with specific evidence at age 13! 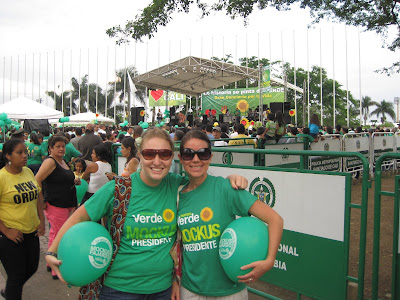 Steph & I with t-shirts and balloons - hooray Green Party!

Kristin, I totally loved the rally I went to. Was Mockus there? Did you hear him speak?

I generally agree with what you said about how far Colombia has come, but I think it's still got a long way to go considering Mockus has had assassination threats and Pardo's bus was hijacked by the FARC...