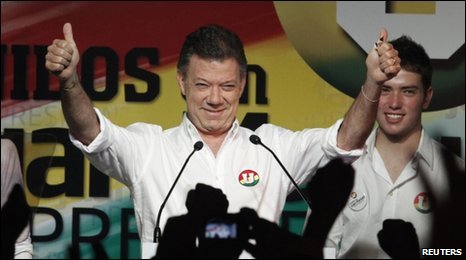 The 2010 Colombian presidential elections were held yesterday. As predicted, no candidate obtained over 50% of the vote, so there will be a second runoff election held on June 20 between Santos (Unity Part/El Partido de U) and Mockus (Green Party/Partido Verde), the leading candidates. In yesterday's results Santos received 47% of the overall vote, while Mockus only received 21%, much less than indicated by the polls. Between now and the election, the two will continue to campaign hard with rallies and speeches in hopes of becoming the next president.

As much enthusiasm as there has been for Mockus recently, I cannot say I was shocked by the results. In my opinion, he is definitely the candidate for change, and I am not sure Colombians are ready for those changes. They like how things have been, they like Alvaro Uribe, the incumbent president, and they approve of his administration - an administration which Santos has been a part of for a long time. The second election will decide for sure, but from yesterday's vote it seems Colombians prefer continuity to change.

One woman interviewed by the BBC really summarized these sentiments:


Standing outside the polling booths in the Bogota neighbourhood of Chapinero, Martha Solano looked pensive after casting her vote. "Up until a few days ago I had thought I was going to vote for Mockus, as I like him and I think he is an honest politician and we have few enough of those," she explained. "But voting for him is a leap of faith and I decided better the devil you know and ticked the Santos box."

Since the second election will be on June 20, that means the last weekend I am in Colombia (aka the weekend after our last day with students) will be another dry weekend. Lame.

For further reading on the election results:

i stole one of your photos. que pena y gracias :)