New Directions for the Colombian Government

(*Yes, I was introduced to the show Glee this weekend, and yes this blog title is a play on that show)
On May 30 of this year Colombians will vote in a presidential election of epic proportions. Up until about six months ago, the race was not too exciting because many expected current president, Alvaro Uribe to be allowed to run for a third term. However, after the Colombian court rejected Uribe's referendum to change the Colombian constitution to allow for this, he gracefully withdrew from the race, thus opening the gates for a full fledged election. Uribe has been president now since 2002, so this will be a big change for Colombia, regardless of the outcome. Politics in any country are often dense and complicated, so here is a breakdown of the current situation.
Background Information
The president is elected by popular vote to a four year term as the head of state. Past presidents are generally elected from one of the two dominant political parties in Colombia, although unlike the United States, third party candidates usually have a viable chance of being elected.
The Election Process
The first round of elections will take place throughout Colombia on May 30 when Colombians votes for one of 12 candidates. Colombian law mandates that in order to win a candidate must receive more than 50% of the overall vote. With the large number of candidates who run, this is typically difficult to achieve, so if necessary a second round of elections will be held on June 20. In the second round of elections only the top two candidates are allowed to run.
The Main Candidates 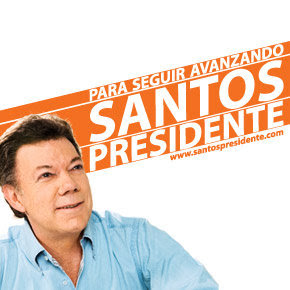 "Con educacion todo se puede"
With education, everything is possible.

"Con Noemi, Ganas Tu, Gana Colombia"
With Noemi, You win, Colombia Wins
What's Happening Right Now?
In recent polls, as of Thursday, April 22, Mockus had a 50-44 percent second-round lead over former Defense Minister Juan Manuel Santos according to the Centro Nacional de Consultoria polling firm. If he does win, he will be the first Green Party candidate to be president of a country.
For updated information as the situation changes, check out the 2010 Elections section of Colombia Reports (Colombian news in English!). Also, this informative article entitled The Obama Administration and Colombia in 2010 does a fantastic job describing why the Colombian elections will be important worldwide, not just in Colombia.
Update (May 9, 2010)
The front page of the NY Times Global Edition discusses the upcoming elections in this article titled A Maverick Upends Colombian Politics.

and speaking of writing.... showing off some excellent bandwidth in what you can write, different voices, different approaches - from flat out comedy and relating personal experiences, your article here on the state of Colombian politics and upcoming elections was fantastic. Hard hitting, impactful, very insightful, complete with the great use of the various sources that you quoted, and giving a comprehensive, objective overview of how things work and good insights for each of the candidates and their parties. I felt like I was reading a REAL article in the NY Times - and that's high praise from a journalistic guy like myself who holds the journalism in the NY Times in high regard. Nice work!!