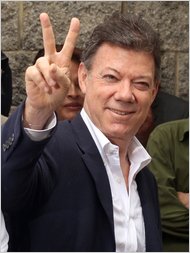 The campaigning has lasted for months, since the time the candidates were all introduced to their rallies, and finally to the first election. Yesterday Colombians voted in a runoff election between the two leading candidates, Juan Manuel Santos and Antanas Mockus.

Earning a shockingly high percentage (69%) of the vote, Santos will be the next president of Colombia. For the United States government, I think this will be seen positively since Santos is closely tied to the incumbent, Alvaro Uribe, who is a rare ally for the United States in Latin America.

As for Colombia, I don't know enough about the political scene and history to say for sure, but Santos will definitely mean more of the same things the country saw from Uribe. Uribe, who had a very positive influence on the country, helped to reduce a lot of violence in the region and is still highly regarded by the public after eight years as president. Santos will certainly have his work cut out for him since neighboring countries of Venezuela and Ecuador hold grudges against Colombia for various reasons.

In the end, I think Colombians voted for him because Mockus is so different from the norm, and they were not ready for the types of changes Mockus would push for. Colombia is definitely growing into a progressive country where new ideas will be heard, but as a whole, I just don't think they're there yet.

For me, this quote from the NY Times says it all, “I went for Santos because we cannot lose what’s been accomplished under Uribe,” said Aleida Sierra, 27, a clothing saleswoman who voted Sunday in Bogotá.

Yeah, suppose the Colombians didn't want to risk their gains under Uribe by letting in someone who's shown a kind of alarming streak of irresponsibility as Mockus has(showing his ass as president of the Nacional being the most glaring example, though I've been desperate enough as a teacher in Colombia at times to try that sort of thing, ha ha). Maybe the country will be ready for someone like him in 4-8 years.