Cheesy title aside (sorry!), I could not be more in love with NYC after my three days there! What an amazing city so full of life, love, history and creativity! I have never been to New York City before this, but I always wanted to go and I am so glad I took this opportunity. While I only had three days to spend in the city, one of which was entirely devoted to the NYC marathon (see separate post!), I really feel like I experienced a lot of the city in this time. Then again, I probably only saw 3% of what there is to see in New York. All the more reason to return, right? ;)
There are so many details from my trip, I am having a difficult time putting the most memorable into writing, but here are some of my highlights from the Big Apple. :)
I have always wanted to see Central Park to experience the beauty of the park and also because I feel like Central Park is one of those classic American locations with so much history! We spent a lot of time walking around the park during the day of the marathon (in part because we got somewhat lost due to exits being blocked off for the race...) and also the following morning. I could not get enough of the gorgeous fall colors, serene ponds & lakes, and amazing skyline in the background. What a unique place! Monday morning my mom and I went over to the Imagine stone in the middle of Central Park, in a small part of the park called "Strawberry Fields". I love the song "Imagine" for the beautiful lyrics and John Lennon's voice singing them, so I have always wanted to visit this mosaic stone. (In fact, IF (big IF mom, don't worry) I ever got a tatoo I think it would say Imagine in brown scripty writing on my foot...not like I've thought about it or anything...) 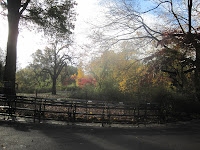 Central Park in the morning. 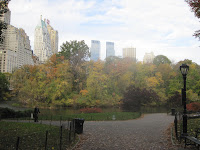 Central Park at midday while at the marathon. 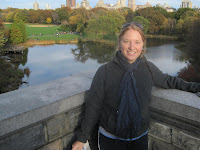 LOST in the middle of the park...it happens rather easily. 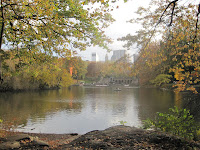 LOVE this photo!!
A bit about Strawberry Fields for those interested: A gift to the park from Yoko Ono as a memorial to her husband, the late John Lennon, after his murder in front of the Dakota Building. The Dakota Building is located along Central Park West about 200m from the mosaic. The area is named for the Beatles’ song, “Strawberry Fields Forever,” and also for an orphanage in Liverpool, England where as a child, John Lennon played with friends who lived there. 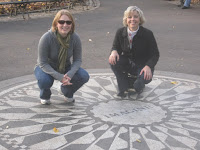 Mom and I at the Imagine stone. 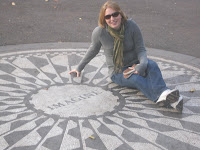 Finally at Strawberry Fields! :)
360 degree video from the Southeast corner of Central Park - GORGEOUS!
Wow! Seriously every fashionable, iconic, typical NYc, Sex & the City-esque store you can think of...with St. Patrick's Cathedral placed ironically in the middle of it all. We walked down Fifth on Sunday, coming home from an amazing dinner with penne vodka pasta!, and I was so astounded by the shear number of stores. And they are all huge!! We also walked past the Plaza Hotel, which is another amazing structure. I cannot imagine all the people who get married there! What an cool location! 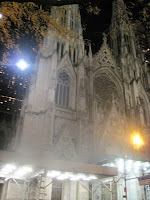 Outside St. Patrick's Cathedral at night. 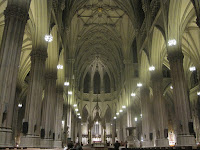 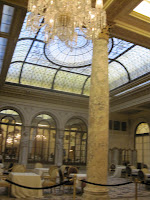 Inside the Plaza Hotel.
While I do have a genuine interest in how our nation came to be, Ellis Island was not on my "must see" list, but I am so glad we went! What an interesting archive to a critical period in our nation's history. My relatives came over from Germany sometime just before the large peak in immigration from Western Europe from 1900-1924, so I couldn't help to think about what that must have been like! I even found this passport of a young man from Germany around that time-how cool is that?? What a cool time in our nation's history, when so many different people populated the US. In recent years we have spent so much time, money and resources figuring out how to keep people out of our country---funny to think there was a time when people came freely and most were accepted. The Statue of Liberty is also really cool & huge! I didn't think it was that big until we got up close!! 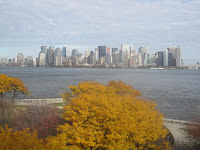 View of NYC out a window at Ellis Island Museum (which is FREE b-t-dubbs...you just have to pay to get the ferry out there!) 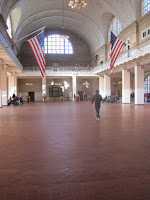 Registry Room replica at Ellis Island - can you believe the thousands of people who came through this room? 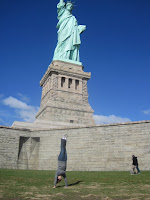 My mother rocks at photography. :) Just hanging with the Statue of Liberty. 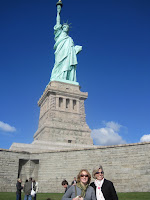 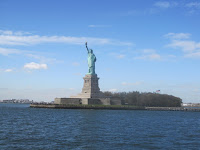 Statue from the ferry boat
Are there any food pictures from my trip??? Absolutely not. Why??? I devoured everything in sight. :) Whoops........ Almond croissants and pumpkin spice lattes in the morning (accoplished within 2 hours of landing at JFK), delicious potato gnocci at Le Zie along with red wine, penne vodka pasta at City Grill, Brooklyn Lager at the 8th floor lounge of Marriott Marquis hotel & at Sam Adams in JFK airport, and a HUGE turkey sandwich at Roxy's in Times Sqaure. 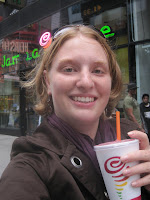 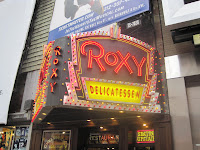 Roxy's Restuarant in Times Square...largest turkey sandwich of my life. 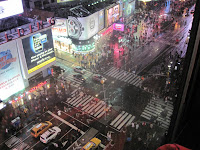 City Grill restaurant.
New Yorkers are tough & mean. Who ever said this and spread this rumor? It could not be more false!! I LOVED talking to people in the city as we walked our way around. Everyone is just so full of life! I had the most fabulous conversation with a girl who works at Jamba Juice next to the NYC Public Library about Colombia and New York and Jamba Juice! LOVED it! People on the subway were super helpful with directions, NYC cops were great and friendly, hte guy who operated the Ellis Island ferry, etc. I could go on, but I was just astonished by the friendly nature of the city. :) 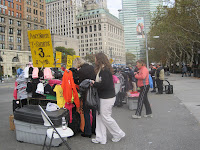 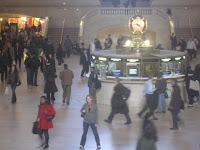 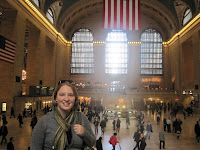 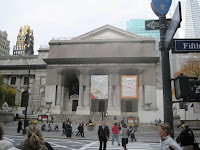 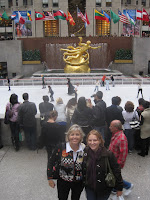 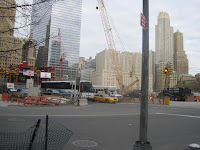 WTC Site...oddly just looks like a big construction zone in the middle of a bustling city.
Last, but not least...here are some "on location" photos I just had to take in NYC...street signs included. Don't judge. I was excited. :) 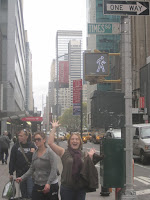 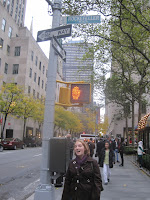 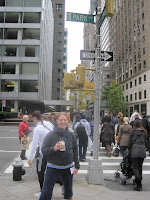 Park Ave. (Think Charlotte York...)
FINALLY there you have it, my brief reflections on a quick visit to the Big Apple. Don't forget to check out the video of me surprising my mom on Saturday morning and my separate post about the NYC marathon!!

I did my first NYC trip ever this past summer and absolutely adored it. I saw SO MUCH in about 36 hours, but obviously have so much left to explore. (PS, I'm a fellow Twin Cities girl - found you through Nicole R's blog recently, looking forward to learning more about you!)

Guys ... I'm shocked ... every day, or even hour, or second, our world is heading for the abyss of vulgarity. Young girls have not even afraid to undress in the street! Before hundreds of people! As this model in New York. He walks through the streets naked! Video posted to Youtube, and is available for viewing ... https://quivo.co horror ..